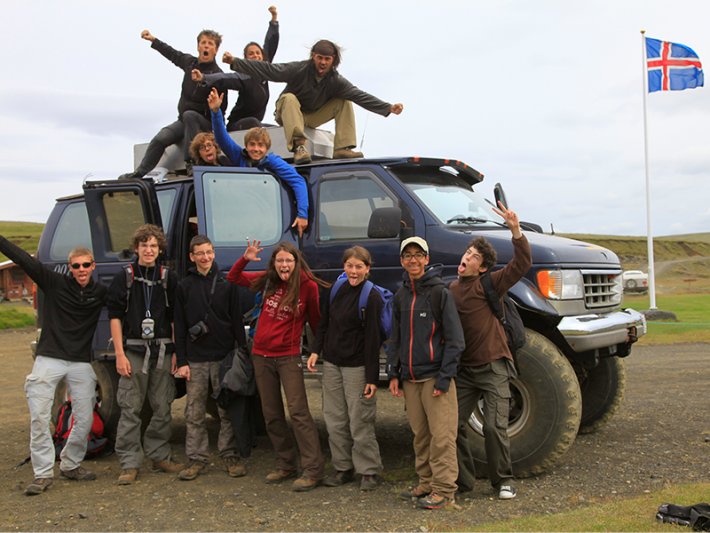 Science, discovering Iceland and hiking, all while contributing to research into the question of geology, volcanic eruptions, glaciers and climate (...) Further Details

Science, discovering Iceland and hiking, all while contributing to research into the question of geology, volcanic eruptions, glaciers and climate (...) Further Details

Your Mission, Should You Choose to Accept It

By conducting scientific field research about glaciers, water, rocks and climate change, you will thus be contributing to the advancement of the Program for Education and Research into Climate and Geosciences (GEOCLIM Sciences).

This will involve taking photographs, recording GPS measurements, setting up temperature sensors, gathering data from the past year, researching and studying weather archives, and conducting surveys among local populations on the subject of climate change in this part of the island: are the glaciers retreating? Have you seen any slope instability, a change in hydrological phenomena, or the migration of animal and/or plant species?

In teams, your will ask each other questions when you observe natural phenomena while out on excursions and you will aim to take the concept further.

Scientists and educators will be on hand to explain the most remarkable natural mechanisms and to help teams equally in conducting their investigations. The practice of writing up and relaying findings and observations will be done daily during group gatherings and speaking time.

Iceland is the land of fire and ice; an island along the Mid-Atlantic Ridge that is spreading at an average rate of 2 cm per year, and is located on two different tectonic plates: the Eurasian plate and the North-American plate.

Iceland is equivalent to one fifth the size of France, and it is home to the largest glacier in Europe, Vatnajökull, which is the size of Corsica. This ice cap covers part of the southeast of the island, with an area of approximately 8,400 km², covering around 8 percent of the country’s surface area. The thickness of the ice cap can reach up to 1,000 m. Under the ice cap there are several volcanoes, some of which are still active, such as Grímsvötn, which erupted in 1996. The five types of volcanic eruptions along with subglacial volcanic eruptions create an environment and unique landscapes that make Iceland a geological exception.

The nature parks are well preserved and are subject to development to ensure that summer tourism will not destroy the fragile soils of the land. Using geothermal energy for heating and producing its own electricity make Iceland almost completely energy self-sufficient. Prototypes of hydrogen-powered vehicles are already on Icelandic roads.

A large population of unusual birds coexists with sheep, reindeer, Icelandic horses, Arctic foxes and seals. Atlantic puffin nests can be seen on the cliffs of the small village of Vík.

We can provide accompanied travel from all major cities of the world (e.g. Rome, Geneva, Tokyo, Montreal, etc.). To take advantage of this system, please observe the following guidelines: To take part in this trip, make your way to Reykjavik Airport. If you live in Europe, we advise you to depart from Paris, Geneva, or better still, London. For the rest of the world, it is best to choose flights operated by an American airline. In any case, please contact the team at the European Center organizing the trip to determine the correct flight schedule.

During your journey, you will discover and practice scientific research methods and techniques in the field using measurement tools and comparing data from past expeditions involving the observation and evolution of a glacier. You will also be studying weather archives and conducting investigations into local populations.

All that fieldwork will be written up as articles, with the aim of advancing the Program for Education and Research into Climate and Geosciences (GEOCLIM Sciences). You will be participating in the advancement of sustainable development solutions addressing the global effects of climate change.

The expedition will take place in southern Iceland. We will begin by visiting the capital, Reykjavik, and then we will do the famous Golden Circle tour during which you will discover Thingvellir National Park, the impressive Gulfoss waterfall, and the Geysir geothermal area, made up of lots of hot springs and geysers, including one active geyser, Strokkur.

Regular hiking tours will be organized, including two consecutive days of camping at Landmannalaugar in the Fjallabak Nature Reserve with day or half-day hikes (for all levels). This reserve features an obsidian mountain, an impressive spectacle with slopes made from ancient lava flows, such as rhyolite, which range in color from ocher through to yellow, green and gray.

You will be able to discover and enjoy a particularity of Iceland, the geothermal areas, some of which offer the opportunity to swim in the hot springs surrounded by nature, as is the case near the Landmannalaugar campsite.

Next, we will set off for a four-day trek in the Fjallabak Nature Reserve, departing from Landmannalaugar and heading to Thorsmork in the south. This trek will be completely autonomous, and we will be camping at night. The Laugavegur trail is a 55-km trekking trail. It consists of four stages of 12-15 km each. The trek does not present any real technical difficulty; there are not many drops, but some paths are steep, and the sequence of climbs and descents can be tiring. Please note that inclement weather, including rain, wind, cold temperatures and sometimes fog, is quite common in Iceland. It is, therefore, important to be well-equipped and… keep your spirits up despite the capricious weather!

After a few days of walking, our itinerary will bring us to Skaftafell Nature Reserve where we will stay for three days to study the Skaftafellsjökull ice tongue. This glacier is part of the immense Vatnajökull ice cap. Further east of Skaftafell, we will take a day trip to see a magnificent sight: Jökulsárlón Glacier Lagoon, a glacial lake scattered with icebergs that have calved away. As the glacier melts, the capacity of the lake increases.

Lastly, on the return journey we will spend a day in the small village of Vík to discover geological beauties such as the basalt columns, the cliffs, and maybe Atlantic puffins, which nest on the cliffs for part of the year.

The trip will be carried out in stages using Iceland buses, and with daily operations in the field, with one instructor for every five participants. We will also be using an off-road vehicle to use trails in the center of the island, including to visit Landmannalaugar. Meanwhile, a group bus will transport the equipment needed for the expedition (backpacks, tents, scientific equipment such as thermometers, computers, binoculars, cameras for photos and videos, etc.), participants’ personal belongings (clothing, cameras, etc.) and food (fresh food and provisions) from one point on the trail to the next.

Iceland buses, which are a trustworthy mode of transport due to the speed limits, and which are flexible when it comes to stopping at camping grounds, will be our preferred means of travel. We will be camping. We will supply the tents to sleep in and the necessary pots, pans and stoves for cooking. Please note that inclement weather, including rain, wind, cold temperatures and sometimes fog, is quite common in Iceland. It is, therefore, important to be prepared and well equipped, and to pay close attention to the list of clothing that has been given to you.

Day 1: Departure from Paris and arrival in Reykjavik

Day 15: Departure from Reykjavik and arrival in Paris